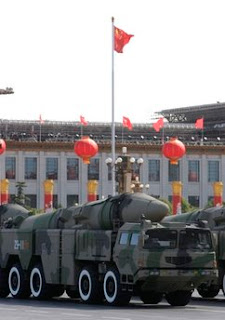 According to the commander of the US 7th Fleet, the new Dong Feng 21D anti-ship missile is not the Achille's heel of US aircraft carriers or the US Navy.

The carrier strike group (formerly carrier battle group) consists of 1 aircraft carrier, 2 guided missile cruisers, 2 anit-aircraft warships, 1-2 destroyers or frigates. In addition to surface ships, there are approximately 60 aircraft on the aircraft carrier. Proponents believe the CSG offers unsurpassed firepower and power projection. Critics argue that CSGs are increasingly vulnerable to arsenal ships and cruise missiles, especially those with supersonic flight and the ability to perform radical trajectory changes to avoid anti-missile systems. The CSG is a high value target and if a successful weapon system can engage the group beyond the range of the aircraft, the CSG would be effectively neutralized.

The Dong Feng 21D is unique in that it is believed capable of hitting a powerfully defended moving target — like the USS George Washington — with pinpoint precision. That objective is so complex that the Soviets gave up on a similar project. The missile would penetrate defenses because its speed from launch would not allow enough time for carriers or other large ships to complete countermeasures.

The USS Cole was taken out by a shape charge of between 400-700lbs of high explosives. The escort ships are vulnerable to similar attacks or attacks by small torpedo boats. Remember, the attacks don't have to be successful. They just have to turn the fleet away.

The DF 21D increases the likelihood that the CSG will ineffective in the future. The CSG is a legacy of the Cold War where the US Navy assumed the dominant bluewater role against the Soviet Navy. The main weapon system is the carrier (even with the advent of surface to surface missiles). That flight deck makes a nice target. Disable to the carrier's ability to launch and recover aircraft and it becomes useless.

Ronald Reagan must have realized this at some level since he was a proponent of reactivating and maintaining battle ships. All of the Iowa class battle ships have been decommissioned. Even so, their 17 inch armor plate can withstand attacks from many modern weapons. Unfortunately, their wooden decks were not replaced and their 15 inch guns still used very dangerous blackpowder.

Modern Navy ships rely on stealth and active defensive systems rather than heavy armor plate. If a threat gets through their defenses, their armor may not be able to withstand the attacks. Carriers especially have many systems for launching and recovering aircraft that are vulnerable to attacks.

The DF 21D and resurgence of piracy should have Naval planners reconsidering their reliance on a Cold War legacy.

Article Here
Posted by Bob Baylor at 10:11 AM