US Stealth Fighters at Iran's Back Door

The 308th Air Expeditionary Wing stood up at Al Dahfra Air Base, United Arab Emirates (UAE) with approximately 1,200 personnel made up of active duty, Reserve and Air National Guard. Longer range aircraft (KC-10 refuelers, U-2, E-3 Sentry and the Global Hawk unmanned aerial vehicle) are based there. Basing F-22 stealth fighters there, changes both the mission of the 308th as well as indicates the increasing tensions between the US and Iran. ABC News 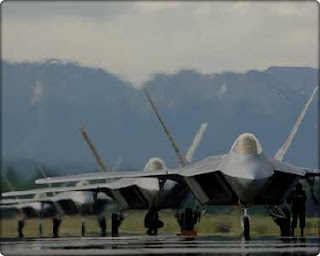 The more interesting part of this story is the F-22 itself. "Since they were rolled out in 2005, F-22 Raptors - the most advanced and pricey fighter jets used by the U.S. military - have been plagued with the oxygen system problems, and have never been flown in combat." Daily Mail

The F-22 has been grounded several times since its roll-out in 2005. The most recent was as recent this past February due to oxygen system problems. It makes you wonder if the decision to deploy our most expensive, unproven weapon system so close to Iran. It could be showmanship to demonstrate a "real" commitment to prevent Iran from developing nuclear weapons. Or it could be an admission that after 10 years of the Global War on Terror, US fighter and bomber aircraft are just too worn-out to be an effective deterrent.
Posted by Bob Baylor at 8:42 AM No comments:

The North Korean military threatened to "reduce all the rat-like groups and the bases for provocations to ashes in three or four minutes, (or) in much shorter time, by unprecedented peculiar means and methods of our own style.
Yahoo News

I guess this is your response when your nuclear missile test fails.
Posted by Bob Baylor at 7:47 PM No comments:

Turkey calls on NATO to protect its borders from Syria

The Assad government, despite calls by the US and UN to step down, does not appear to be leaving anytime soon. Now Turkey is thinking along the lines of Israel, namely they see the situation as a clear and present danger with incursions into their borders. What makes the situation in Turkey different is its membership in NATO. A threat to one member is a threat to the Alliance. Taking a page from the Bush Administration, Turkey probably won't declare outright war against Syria but rather label Assad and his supporters as "terrorists".

RT
Posted by Bob Baylor at 7:28 AM No comments:

He has achieved what he most wanted, infamy. According to the Daily Mail, a prisoner as dangerous as he is would normally have been sent to Ringerike, Norway’s highest security prison, but this was ruled out because of its location overlooking Utoya. Instead he gets to have a large space, good food, and better treatment than most law-abiding citizens. Norway will come under scrutiny by hard-liners who will demand to know why Anders is being treated so well. Norway has demonstrated the efficacy of humane treatment and true rehabilitation of prisoners. An exception like Anders though makes the policies seem naive. The bigger question is not how Norway treats its prisoners but how Norwegian culture and politics (known for being liberal and progressive) could create such a mass-murderer.
Daily Mail
Posted by Bob Baylor at 8:31 AM No comments:

Japan's defense minister has ordered missile units to intercept the rocket if it or its fragments threaten to hit Japan. Seoul has also warned it might shoot down any parts of the North Korean rocket heading for South Korean territory.
MiamiHerald.com
It could be just a coincidence, however the threatened rocket launch by North Korea will force the Obama Administration to split their attention between the Middle East and the Pacific. Most the US fleet is trying to face down Russia and Iran in the Middle East and are out of position to influence much in the Pacific. The new North Korean leader may be trying to assert himself on the international scene or simply is following in his father and grandfather's footsteps in flexing North Korean military muscle (while their population gets hand-outs for the US).
Posted by Bob Baylor at 7:05 AM No comments:

"Forces were reported to have shot and wounded four people in a Turkish refugee camp and killed a Lebanese cameraman in North Lebanon. Regime forces also killed at least 30 people when they pounded a town in the central province of Hama, activists said." FT.com

Even with Russia and China supporting the Annan plan, violence is continuing in Syria.  There is no strong opposition leader with the needed network to easily assume power when Assad finally steps down or is overthrown.
Posted by Bob Baylor at 7:33 AM No comments: