In a poll from the Pew Research Center, global warming came in last amongst the public's priorities. I've always felt global warming was being hyped more in the media than was truly on the minds of most people. This is not an argument about the science behind global warming (or climate change as it is now called), rather it is an affirmation of people's priorities. Global warming, the environment, concern for others depends greatly on one's own particular plight. If you have a job, have a home, food and a some standard of living then you start to worry about issues beyond your own survival. However, the economy and world affairs are keeping people focused squarely on survival issues and only the affluent or activists make global warming a priority. Think about it, how many people do you hear in the grocery store, local bar, sporting event, bookstore, restaurant, or coffee house arguing about the effects of global warming? If an affluent nation such as the US doesn't have a large population discussing global warming, what is the likelihood that in nations such as Nicaragua, Honduras, Haiti, in this hemisphere or Pakistan, Vietnam, or Laos in the Eastern Hemisphere have global warming as a priority? I would wager these countries are also focused on survival issues.

Posted using ShareThis
Posted by Bob Baylor at 8:35 AM 3 comments:

President Obama made it seem during his election campaign that by reducing troop levels in Iraq he would by default reduce the the number of troops stationed overseas. Shortly after taking office, he announced his plans to increase troop levels in Afghanistan. The plan received much coverage as the President and Gen McCrystal publicly disagreed as to the final number of troops required. What has gotten much less coverage is the increase in the number of bases being built overseas on other nations. The problem is the construction of these bases and deployment of interceptor missiles is their presence is likely to increase the tensions they are pro-ported to decrease. The Soviet Union may be gone but the feelings of encroachment caused by an ever increasing US presence in Eastern Europe has not changed. The Obama administration seems to be increasing the presence of US military forces abroad without regard to long term consequences. The US has never had the best relationship with Central and South America, yet according to the article 7 new bases are being built. These bases will only serve to prove the point of those calling any American military presence proof of US colonial expansion.

Posted using ShareThis
Posted by Bob Baylor at 7:21 AM No comments:

Email ThisBlogThis!Share to TwitterShare to FacebookShare to Pinterest
Labels: US military bases

The story could just as easily be about the DHS Threat Advisory system. The public doesn't understand what causes a change in threat levels and thus don't care when it is raised. The case of Abdul Muttallab happened with no change in our threat system either before or after his attempted attack. The British system appears to be raised in anticipation of some vague threat. You can see from the comments that the British public are thoroughly unimpressed. If government officials want to the public to take these systems seriously, they need to do a better job of explaining the threat. TSA needs to seriously re-evaluate their procedures to show they are effective at detecting and preventing terrorist attacks onboard aircraft. Until then, the US and UK threat advisory systems will be treated like the little boy that cried "Wolf!" too many times.

Posted using ShareThis
Posted by Bob Baylor at 10:04 AM No comments:

I was never convinced the answer to 9-11 was to create another bureaucracy. The recent attempt by Abdul Muttallab to board a Northwestern flight bound for Detroit with liquid explosives further dispproves a bureaucratic solution to terrorism.

Umar Farouk Abdulmutallab fashioned a bomb using pentaerythritol trinitrate (PETN), a colorless and odorless high explosive. He tried to smuggle the bomb inside he underwear and planned to used a chemical igniter to set the bomb off. He planned to board a Northwest Airlines flight in Amsterdam bound for Detroit. According to Abdulmutallab himself, he received the training and materials to make the bomb in Yemen.

The incident created a cascade of embarrassments for world leaders. Secretary Napolitano of the Department of Homeland Security (DHS) was first quoted as saying the system worked and then changed her statement admitting the system had failed. Not to be outdone, former DHS Secretary Michael Chertoff proclaimed that by mandating full body scanners the Detroit bomber could have been prevented. His credibility was immediately questioned when it was revealed that he worked for the one of the manufacturers of full body scanners.

President Obama assured the public that heads would roll. The CIA had identified Abdulmutallab early on and had recommended his name be put on the no-fly list. His name was forwarded to the National Counter Terrorism Center (NCTC) which maintains all of the no-fly lists. Somehow his name was never published. It was also revealed that Abdulmutallab’s father went to the US Embassy to report that he feared Umar had become radicalized. Despite these revelations, Secretary of State Clinton and National Security Advisor Jones have remained out of the spotlight.

Prime Minister Gordon Brown felt his political career slipping away as reports surfaced that MI-5 had information about Abdulmutallab and his plans to board an aircraft with a bomb. Apparently this information was not shared with the Americans or Dutch.

While the world watched the finger pointing, another interesting thing happened in Newark, New Jersey. A man walked the wrong way down the exit terminal. TSA personnel were unable to stop him before he disappeared. TSA locked down the airport for hours as they tried, in vain, to find the individual. Apparently one of the TSA cameras in the terminal had been malfunctioning for six days! It took TSA several more hours to contact Continental Airlines to look at the camera footage. As of this writing, the man’s identity remains unknown.

The world in general, and the United States in particular, has become so enamored of technology that we see it as a solution to human failings. There is no reason why Abdulmutallab should have been able to execute as much as his plan as he did except for people failing to share information. The terrorists have this figured out and are going to continue to exploit it until they get it right.
Posted by Bob Baylor at 7:37 PM No comments: 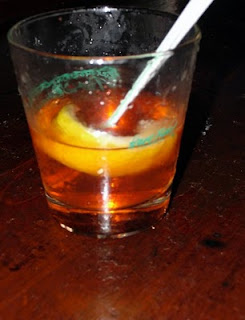 It seems somehow unreal that I can drive to New Orleans in little over 12 hours but that’s exactly what I did on Wednesday. Spending a couple of days in the Big Easy to attend the Sugar Bowl caused me to reflect on several things.

First, in 12 hours of driving you can go from freezing winter weather to near spring like weather. The drive was through a pouring rain but by Thursday, the weather had cleared and the sun was out. Seeing everyone out in the sunshine made realize the impact of long, dark winters have on our psyche. Having sunlight even in winter may be one of the reasons why some many people in New Orleans are so damn friendly.

I’ve been to New Orleans at least a half dozen times since I first visited there in 1978. The Crescent City still shows scares from Hurricane Katrina but it also shows a certain kind of resilience. I never grow tired of visiting there.

If you have not been to New Orleans before, Mardi Gras may be the biggest part for New Orleans but it certainly isn’t the only one. You can walk all over the city with open containers of alcohol. Fill your glass (usually a plastic tumbler though) with your preferred drink (hurricanes, hand-grenades, daiquiris, or plain old beer) from your favorite establishment and have yourself a stroll.

As someone who teaches safety and security, this seems to be a recipe for trouble. The Big Easy manages it with a certain aplomb allowing visitors to enjoy themselves without hassle. Looks are deceiving though as let any of the crowds start a fight and the protagonists will be quickly and efficiently whisked right into jail.

New Year’s Eve 2009 on Bourbon St, never have I seen so many UC fans! It seemed like most of Cincinnati had decided to wear black and red to celebrate the holiday down in New Orleans. I strolled Bourbon Street for pretty much all of the day and evening and only saw perhaps one altercation. The NOPD swept in and removed the participants before most of the crowd even realized there was an argument.

The Bearcat fans represented their team well. Literally everywhere you went on Thursday and Friday, you saw people wearing black and red. For some reason, the Florida fans were not as visible. You would see the occasional group of fans in orange and blue but it seemed the Bearcat fans always outnumbered them.

On the way to meets some friends to tailgate, I was again reminded of how different New Orleans is from the rest of the world. Where else but in the Big Easy are you hustled by street side vendors selling bottles of booze?! The tailgate was a surprisingly small gathering. A few Gator fans were there and are some of the coolest fans I’ve hung out with. An official came by the tailgate offering free tickets, it seems the Florida allotment did not sell out. It seems impossible but yes, a bowl game only six hours away (in New Orleans no less!) and it still didn’t sell out.

The sports experts – both real and imagined – will speculate on the X’s and O’s of the game. The bottom line; the Bearcats suffered their first lost of the season. This after losing their head coach and having a one-time interim to coach them in the biggest game of the school’s history! This is what the Bearcats took with them before facing Tim Tebow and the Florida Gators. The outcome was inevitable but I feel the Bearcats did get to show their best game. Regardless, all of the fans were just as proud of their team as any Gator fan (maybe even a little more).
Posted by Bob Baylor at 6:57 PM No comments:

Typical reaction, rather than review and improve the measures that are currently being used Chertoff wants to buy yet another toy. Technology is important but it wasn't technology that failed in this case but rather communication amongst the CIA, DHS, TSA and other agencies. The lack of communication between agencies is nothing new but whole body scanning is just an unnecessary distraction. Nothing will change until the inter-department BS that lead to this incident is solved.

Posted using ShareThis
Posted by Bob Baylor at 9:36 AM No comments: