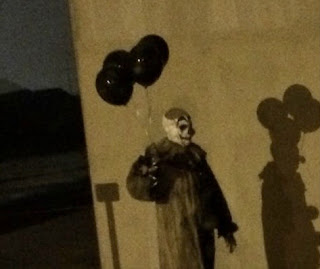 This is "Gags", the Green Bay, Wisconsin creepy clown first spotted back on August 1st of this year.  "Gags" seems to be the starting point for the "Creepy Clown" sightings that have swept through much of the United States.

North Carolina had a cluster of sightings, then South Carolina.  Sightings then began to pop up in California, Washington and Oregon.  Then we started to get them here in the Tri-State area.  (For readers not from this part of the world, the Tri-State area where Cincinnati is located is formed by the Southwest corner of Ohio, the Southeast corner of Indiana, and the northwest top corner of Kentucky).

First we started to have some random sightings out in the eastern side (which is suburbs but still a lot of farmland) and the northern suburbs.  Then sightings started about two weeks ago in Kentucky.  Given the time of year, it was easy to dismiss this as some kind of stupid fad going around.  Then things got interesting….

"We are coming to a town near you :) be one with us or be against us your choice not ours. Ohio, USA."--that is the byline on the "Clown Clan" twitter account that was opened just last week.  Local sheriffs and police departments have taken the threats seriously.  Then this morning we got this headline…

"Report of Reading woman attacked by clown closes schools" So now we have gone from amusing, albeit creepy, to now attacks and disruption to people's lives.  Simultaneous to the increase in "creepy clowns" the Tri-State area has seen a spike in threats being called in to local elementary and high schools.  Two weeks ago, one high school football game was cancelled due to a bomb threat.  All three of the local high schools out in Clinton county have been evacuated at least once over the past few weeks due to threats.

What is going on?  One clue may be that despite the rash of sightings of "creepy clowns", none of them have been run over, shot, stabbed or punched out.  It would indicate that there may not be as many "creepy clowns" in reality as the headlines may make us think.  People may be mistaken in what they see or simply panic when some stranger is following them.

None of the bomb threats have proven to be anything other than hoaxes so far.  The perpetrators of both the "creepy clowns" and making threats are looking for ways to be noticed and these two news stories are providing them great ways to get noticed.

Paranoia combined with some mild hysteria in the 21st Century results in shutdowns.  It doesn't mean there isn't a threat, we just have to remain vigilant. One of these times, the "creepy clown" or school threat won't be a hoax.
Posted by Bob Baylor at 10:30 AM No comments:

Why I didn't watch the debates

Despite all of the vitriol being hurled by both candidates, and even more at each them, they have both managed to keep what they plan to do should they reach the White House opaque at best.  Immigration has become a major topic, especially after multiple bombing and mass shootings being committed by immigrants here in the US and abroad.  Other than that, the economy?  Maybe healthcare reform?

Sitting here this morning avoiding the deluge of social media and mainstream media posts about the debates, my mind turned to the military.  Fifteen years ago, the attacks on the World Trade Center, the Pentagon and Flight 93 happened.  As a result, many men and women decided to join the US military.  For those that are still in, the means they have deployed at least 5 or more times over their 15 year career.

Not only have they have deployed to Iraq and Afghanistan multiple times but many had to support operations in Libya and now Syria (as well as Iraq to fight ISIS).  Other troops have been busy trying to not start a war with China over contested islands.  Air defense pilots are constantly getting harassed by Russian planes flying near the ADIZ along Alaska and Hawaii.  Reports of Russian Navy vessels operating in the Gulf Mexico seem to have quieted down for now.

All of this has happened within the last 15 years with no down time for troops or equipment to be "refreshed".  When units from the Ohio Army and Air National Guard were first being sent over, it was a major event with whole communities coming together to support the troops and their families.  While that still happens, after 15 years ever has just become numb for there is no end in sight.  As I started to say, troops who joined as a result of 9/11 have around 5 more years before they hit 20 years of service (minimum time before becoming eligible to retire).  Those troops will see at least one more major deployment before they can retire.

Personnel are exhausted as deployments have now become as de rigueur as exercises were 25-30 years ago (except of course an exercise is not the same as combat).  Personnel are rated on their performance in combat zones but rather by their home station assignment, which of course they aren't there to perform.  Warriors are not as prized as Hollywood would make it appear because those heroes in combat aren't working for their home station commanders when they are doing all of that hero stuff.  And while the heroes are away doing what they do best, it's the ones that stay back home and get their tickets punched that get promoted.

The US military is tired and broke after 15 years of continuous war and neither of the windbags vying to sit in the White House has a damn plan to fix it.  So I didn't waste my time watching the debates, there was nothing new to be seen anyway.

Obesity in the Military

“We make generals today on the basis of their ability to write a damned letter. Those kinds of men can’t get us ready for war.”--Chesty Puller, LtGen, USMC

I'm not sure when LtGen Puller made that quote but he was even more prescient than he may have realized.  The war on terror has lasted longer than any other war the US military yet it hasn't produced the kinds of leaders Chesty Puller was thinking of.  Instead, the latest generation of generals is nothing more than a bunch of consensus builders who rose through the ranks by not challenging convention.  Those that did ended being purged by the Obama administration, further keeping the herd culled of trouble makers like Puller would have been.

Nowhere is this more obvious than in the USAF and its pursuit of "fit to fight".  Once the shooting started, the USAF wanted its men and women to be able to do the same things physically as the Army and Marine Corps.  So that USAF added push-ups and sit-ups to its physical fitness assessment starting in 2003 or so which was supposed to get its airmen in shape to fight terrorism.

Fair enough, dragging equipment out to the flight line and repairing aircraft in 120 degree requires a level of fitness beyond just being able to run 1.5 miles (the old USAF physical fitness standard).  The previous physical fitness standard in the USAF lacked a component to measure upper body strength and core strength but it did include height and weight standards.  Adding the push-ups and sit-ups was a much needed addition, however that wasn't enough for the data-driven future generals in the USAF.

USAF officers by a wide margin hold engineering degrees or at least technical degrees meaning they are predisposed to data and numbers.  Simply adding push-ups and sit-ups could not possible guarantee a process improvement that could be measured so some nameless officer (I truly don't know who otherwise they would be named here) decided the Body Mass Index (BMI) must be incorporated as well.

And that ladies and gentlemen is when the USAF truly went to hell.  BMI is derived from the height and body mass of a person.  The inclusion of the BMI was supposed to be that process improvement that the engineering types were looking for but instead, it has created a culture of witch-hunts for those who can't pass the BMI.

BMI has a major flaw in that it only looks at height and mass, it assumes all body types are the same.  Therefor if you have narrow shoulders and wide hips (as most women do), BMI will still show you as obese when you otherwise height and weight proportional and able to pass your physical fitness test.  For men it rewards those with thick necks and tiny waists, otherwise BMI will show most men, regardless of their level of physical fitness, to be "obese" and thus not fit to fight.

This is why the headline, "Military Obesity Rates Skyrocket", is both correct and misleading.  Obesity rates have skyrocketed as a result of the use of the BMI and why women and minorities in particular are challenged to make their tape.  Obesity rates are skyrocketing because of the generals, and those that want to be, embracing the BMI without regard to basic anatomy.

The USAF generals have run commanders and first sergeants into the ground about how well their unit does in their annual physical fitness assessments.  Forget the mission, we need to be lean mean fighting machines (even though most USAF jobs are located on a fixed based, requiring less physical stamina that those in the Army or Marine Corps).  This has created a culture of men and women that are constantly harassed about making their weight (in addition to stress associated with deploying and getting ready to deploy).

Without realizing it, the USAF has now become about looking good instead of doing good on your job.  The generals all look good and can write letters, just as Chesty Puller pointed out, yet they can't lead.
Posted by Bob Baylor at 4:00 PM No comments:

The following rant has been gestating in my mind for some time.  Events in the news make me even more convinced than ever of the truth of the fact the war is a racket.

Now I'm not the first to come to that conclusion, nor am I the first to use that term (Maj Gen Smedley Butler, USMC wrote a book by that title 81 years ago).  What MG Butler discovered after fighting in the Spanish American war was that military operations were not really about winning as much as they are about profits, profits which benefit only a small, secretive group hence his use of the term "racket".

Since then, matters have only gotten worse.  By the time the F-35 comes on-line with the Air Force, Navy and Marines the program will have cost $1trillion dollars!  How can such gross mishandling continue without some kind of intervention?  Easy, Lockheed Martin insured that the components of the F-35 were dispersed over 46 states.  Even Bernie Saunders is a supporter.

But what is a weapons system without a threat?  Hence the change in US relations with Russia and China (and now even Iran).  The F-35, it is argued, is needed to maintain air superiority against an revanchist Russia.  Of course those making those claims conveniently forget it was the US that called for expansion of NATO by adding pretty much all of the former Warsaw Pact nations.

Global Research did a pretty job of analyzing all of this as well.  Don't be fooled, neither Trump nor Hillary are going to change any of this as there is simply too much money to be made.  A new Cold War is just what the doctor ordered for creating jobs in districts of those politicians needed to pass key legislation.  Regardless of who wins the White House, they will still be beholding to the military-industial complex.
Posted by Bob Baylor at 10:26 AM No comments: