Before the government shutdown, Mr. Trump referred to Haiti and African nations as "shitholes".  Trump supporters were quick to point out images such as this; 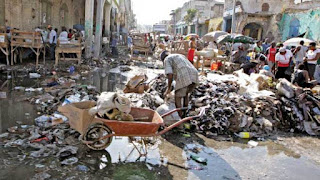 Yes, that's Haiti. The first black nation in the Western Hemisphere (after kicking the slave-owning French out) who were ignored by the United States and Europe.  Neither the US nor Europe offer the fledgling nation a chance to develop a modern, democratic government.  Even when the US finally did reach out to Haiti in the 1960s, it was to use Francois "Popa Doc" Duvalier (who founded the Tonton Macoute) as a hedge against the threat of expanding Communism (read Soviet Union) in the region.

In 2011, Haiti suffered an earthquake and is still trying to recover.  To those who would point out that this is just more proof of what a shithole country really is, remember that Haiti had no infrastructure to speak of before the earthquake.  Aid and recovery efforts found it difficult, if not impossible, to restore to country over the last 7 years.

And of course there is this; 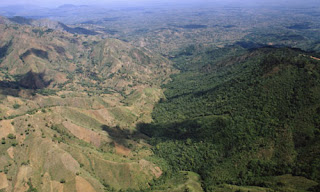 This shows Haiti on the left and the Dominican Republic on the right.  The deforestation of Haiti started back when it was still controlled by the French in the 19th Century.  The photo was taken in 2012.

My point today is not to defend Haiti as much as to point out the hypocrisy of Trump and his supporters.  Let's look at another picture. 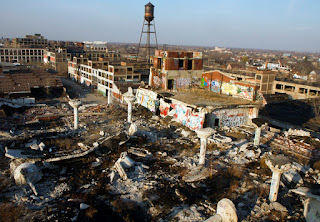 This is an abandoned part of Detroit from 2012.  How does this not qualify as a "shithole"?  Or how about this one; 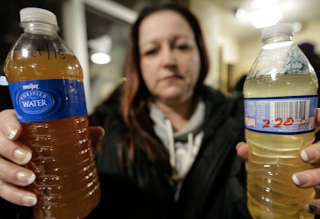 That's Flint, Michigan drinking water as of 2016.  The water had been looking like that for over 3 years!  And while the EPA will say the water now is at "acceptable levels" of pollutants, the residents still can't drink the water in 2018.

My point is Trump haters got mad but let him and the media get a pass on hypocritical is was to called out other countries for being "shitholes" when the most modern nation in the world can't even provide clean drinking water for all of its citizens.

If something this patently obvious is avoided by the media and public, imagine the consequences of misrepresentations of issues that actually require research to debunk!


Over the last few months, a few items have been in the news that might have missed your attention;

Item:  The USAF has a pilot shortage, so much that they've been talking about recalling retired pilots to help train new pilots.  http://www.businessinsider.com/air-force-has-a-pilot-shortage-due-to-lack-of-training-resources-2017-10

Item:  The US Navy waived the PT scores of over 48,000 sailors that would have been discharged for failing to pass their annual PT assessment. https://taskandpurpose.com/48000-sailors-failed-prt-just-got-sweet-deal-navy/

Item:  A US Army Special Forces soldier alleged in an open letter that the Special Forces Qualification Course (or "Q" Course) is passing people who are not being held to the same physical fitness standards as in the pass. https://sofrep.com/94786/careerism-cronyism-malfeasance-special-warfare-center-end-special-forces-capability/

Item:  The US Marine Corps was found by the General Accounting Office (GAO) to have fallen short (along with the US Navy) in providing adequate amphibious ship training.  https://www.military.com/daily-news/2017/12/02/amid-shortfalls-most-usmc-requests-ship-training-denied-last-year.html

These items may individually not make much headlines but collectively it speaks to the effects of a US military that has been at war since 2002.  Except of course that is the deception.  Starting with Bush then Obama and now Trump, no US President has asked Congress to declare war.  If Congress were to declare war on Al-Qaeda, ISIS, or the Taliban then there would also have to be an end date.

No end date means operations can continue unabated and can be conducted in multiple locations.  As a result, the US military has been in a constant state of war for 16 years.  The stress and strain to personnel and equipment is why we see the problems I listed above.

So to some it was great news when Trump signed the National Defense Authorization Act last month.  In addition to its $634 million in spending, it also has the first manpower increase authorization in seven years.  But looks are deceiving.

If we have been at war for 16 years (the longest in US history), then rather than celebrating more money and personnel to keep fighting shouldn't we be asking when will it end?   Oh and yes Russia, North Korea and Iran are threats but wouldn't the better strategy be to reduce our footprint in other theaters and focus on resetting our troops and equipment?

As a final thought, this weekend Hawaii was sent into panic as a false alarm went out about a missile launch.  After months of threats from North Korea, we find that our system for warning our citizen can send out a false alarm simply by someone pushing the wrong button?  We need to focus more on our training and re-assessing our systems and not spend more money on operations with no end-date in sight.
Posted by Bob Baylor at 2:26 PM No comments:

As we begin the new year, let us reflect on nuclear weapons for a moment.  The Soviet Union at the height of the Cold War had in excess of 4,000 nuclear warheads.  The US wasn't too far behind with right around 4,000.  Today, Russia and the US have 1,950 warheads.  The smallest of these warheads are many times more powerful than those dropped on Hiroshima or Nagasaki.

Somehow, despite some close calls, we all survived two major superpowers point nuclear weapons (not to mention conventional forces as well) at each other.  Oh and during this time, China, India, Pakistan, England, France and most likely Israel and South Africa developed nuclear weapons.  Yet none of these developments have fanned the flames of fear like North Korea.

Perhaps it's in part because Kim Jong Un seems disconnected from the reality of what a nuclear exchange with the US would mean.  Perhaps it's because Mr. Trump takes umbrage easily and retaliates via social media insults.  We have never seen two such petulant world leaders, even during the Cold War.

Mr. Obama and his predecessors chose not to engage with directly with the North Korean leader and preferred diplomatic measures to try to reign in Pyoanyang's nuclear program.  It is debatable how effective this was at stopping allowing North Korea to develop nuclear weapons technology, however it did keep Kim Jong Un's rhetoric down to a dull roar.

So is North Korea really more dangerous than a nuclear armed Russia or China?  From a strictly technological view (i.e. number of warheads) the short answer is no.  However, what makes North Korea or any nuclear power dangerous is the people in charge of those weapons.   And this is where things get interesting.

Mr. Trump successfully ran an election by being the very in-your-face kind of candidate he portrayed on his TV show.  While that made for good ratings and an inauguration, the same tactics don't work as well on the foreign policy front (and yes, it leaves much to be desired on the domestic front as well).  When does bluster stop and the shooting start?

Kim Jong Un is unfortunately even more unpredictable and dangerous.  From most accounts, he appears to have a volatile temper which may in part be fueled by nearly debilitating bouts of gout.  Those who disagree with him tend to be executed.  Two temperamental leaders with their fingers on the launch button that don't like each other, sounds like something out of an episode of 24.

Thus far, Mr. Trump's rhetoric to not tolerate any further tests by North Korea have remained just talk.  However, with an increase of US forces in the region in the form of 3 carrier strike groups there is an increasing possibility of an incident between US and North Korean forces.  Or Mr. Trump could authorize some type of preemptive strike on North Korea.

With such little patience on social media these days to hear out anyone with a differing opinion, will we even realize we've declared war until it is too late?