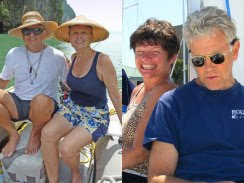 The news (and my blog) have been filled with information about protests throughout North Africa and the Middle East. The news has also been filled with growing protests in the United States over the potential loss of state employees to use collective bargaining.

Somehow in the midst of all of this, the deaths of Scott Underwood Adam, Jean Savage Adam, Phyllis Macay and Bob Riggleby Somali pirates has gotten only minor coverage.

Piracy is a war-like act committed by private parties (not affiliated with any government) that engage in acts of robbery and/or criminal violence at sea. The term can include acts committed in other major bodies of water or on a shore.

During the 17th and 18th centuries, once pirates were caught, justice was meted out in a summary fashion, and many ended their lives by "dancing the hempen jig", or hanging at the end of a rope.

Somalians are now the premier perpetrators of this ancient crime since at least 2005. A United Nations report and several news sources have suggested that piracy off the coast of Somalia is caused in part by illegal fishing and the dumping of toxic waste in Somali waters by foreign vessels that have, according to Somali fishermen, severely constrained the ability of locals to earn a living and forced many to turn to piracy instead.

Somali piracy has increased the cost of shipping and has allied such unlikely organizations as the French, Russian, Indian and US Navy to combat the threat. Most famously, on April 8, 2009 seized the Maersk Alabama piloted by Captain Richard Phillips. The pirates kidnapped the captain who was rescued by US Navy SEALs. The three pirates who had kidnapped Captain Phillips were shot by the SEALs.

While more navy ships have been patrolling the waters of the course of Somalia, shipping companies such as Maersk have refrained from arming their crews in fear that such actions will lead to escalation.


Now the Somali pirates have upped the ante according to a CBS report:

Their deaths appeared to underscore an increasingly brutal and aggressive shift by pirates in their treatment of hostages.

Killing hostages "has now become part of our rules," said a pirate who identified himself as Muse Abdi and referred to last week's sentencing of a pirate to 33 years in prison for the 2009 attack on the U.S. cargo vessel the Maersk Alabama.

"From now on, anyone who tries to rescue the hostages in our hands will only collect dead bodies," he said. "It will never ever happen that hostages are rescued and we are hauled to prison."

The pirates fired a rocket propelled grenade at the US Navy destroyer that was shadowing the American hostages. The Somalis have argued the US Navy fired first which lead to the death of the Americans. A member of a U.S. special operations force killed one of the pirates with a knife. A second pirate was also killed, and the bodies of two other pirates were discovered on board, bringing to 19 the total number of pirates involved. The U.S. military didn't say how those two died and it was not known if the pirates had fought among themselves.

While we watch Gaddafi massacre his own people it is easy to think that doesn't really effect us. While union workers in Wisconsin and Ohio protest over efforts to end collective bargaining, it is easy for forget 4 Americans were killed for no greater sin than having a passion for sailing. The world is becoming exceedingly dangerous and volatile.

CBS Article Here
Posted by Bob Baylor at 8:04 AM

A guy on the Jimmie Lehrer show said there are currently about 700 hostages held by Somali pirates. I don't think this is terribly different from what was going on in the Mediterranean in the 1800s when Jefferson sent in the Marines. We'll probably need a similar solution with Somalia.
Nice that they have rules.....