The Washington Examiner ran this story the other day, "DHS Eyes Special Declaration to Take Charge of Elections".  The tabloid nature of the news site should cause one to examine carefully what is being reported, however the main points of the story are still alarming.

As we have seen repeatedly during this election cycle, politicians and political parties are having their computers and accounts regularly hacked.  Back 2010, Wikileaks became infamous for releasing US State Department classified documents.  Our belief that our networks are secure is often times more myth than fact.

Heading into one of the most tumultuous Presidential elections in history, the potential to alter election results by some outside group is too tempting.  The US public is already at each other's throats over everything from who is running for President to whether or not an NFL quarterback should be fired over not standing for the national anthem.

For those who may have forgotten, if an attack were to alter elections results it would not be the first time the Presidential election process faced scandal.  Remember the hanging chads of the 2000 election in Florida?  As a result of that election, more electronic voting measures were adopted through the country, which means even more systems are vulnerable to a cyber attack.

Which brings up two very different issues about the Washington Examiner story, first of course is what if anything can be done to insure the 9,000 different voting districts are secure from attack?  The second is, should that responsibility be placed in the hands of DHS?

The election process of the US is run either by the state or county (as it is here in Ohio), not the federal government.  This is how it is framed in the US Constitution is gives us our republic form of government.  Changing that is way beyond the scope of the 60 plus days before the election and would represent a huge increase in the power of the federal government over the states.  Should a change happen, Washington then could null and void any election they deemed fraudulent.

Even if no changes were made to how elections are done, then the other major question is why DHS (which is really an amalgamation of 7 different federal agencies hurriedly slammed together after 9-11) suited to deal with this threat?  According to the article, there are 9,000 different voting districts in the US and there is only really 2 months left before the election.  DHS is hardly the most nimble federal agency and lacks the necessary manpower and equipment to take on such a huge task.

The dual-edged sword of the 21st Century is that technology flows information around globally, which requires networks to be open enough to allow that flow of information.  And that is all the hackers need to get in.

All of those voting districts are at the county level which already challenged dealing with preventing voter fraud.  To further challenge them to harden their systems against cyber attack (especially in 60 days) is beyond even the most affluent districts.  Compound that problem with the results having to be shared with the state board of elections (another point of vulnerability) and magnitude of the problem becomes apparent.

And this would be even if there wasn't such an emotional state surrounding the elections!  With tempers running hot, no one wants to see the other guy even get close to winning.  A few well placed cyber attacks to call into question the results and hell will be break lose.

Yes folks, we have a big problem but DHS is not the answer.

Update:  Since I posted this entry, US News published a very interesting article on what might happen should a candidate die.  Why this article is so interesting is it details how the electors of the Electoral College are not bound to vote according to their state's results.
Posted by Bob Baylor at 12:59 PM No comments: 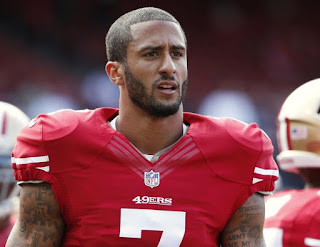 For some reason, this guy gets criticized, called names, told to leave the country by people who proudly wear this

Whether you agree with Colin Kaepernick or not, he is doing the very thing that we claim to celebrate in the United States…the right to protest that which we don't agree with.  Kaepernick isn't calling for violence or more shootings, he is merely using his status as an NFL quarterback to call attention to an issue that he feels very strongly about despite the potential of injury to his career, endorsement deals or even his own personal safety.  How more American can you get?

It shows you how narrow the view of "patriotism" has become in this country.  Anyone not fitting that "mom and apple pie" type of patriotism is subject to scorn and ridicule.

Gabby Douglas is vilified for not putting her hand over her heart during the national anthem, yet Ryan Lochte lies to authorities and ends up getting two other swimmers arrested but hardly a word is said about him.

As someone who proudly wore the uniform of the US military for 22 years and was in two wars, I respect my country and am a patriot but I do feel compelled to vilify someone for falling to cover their heart during the national anthem.  Anybody, including our nation's enemies, can stand and cover their heart during the national anthem so why get so bent out of shape when someone forgets to?

Obviously Kaepernick is sitting intentionally to bring attention to blacks being killed by cops.  For some reason, Kaepernick isn't allowed to protest in his own way an issue that is dividing this country.  For all of the supposed cop supporters, I have yet to see any calling for a dialog to de-escalate the situation.

Critics point out that more blacks are killed by blacks than cops or that more whites are killed by cops.  But what does that have to do with the original issue, the one Kaepernick is protesting, that if you are black and encounter a police officer there is a much greater risk that the encounter will turn deadly than if you are white?

I'm not taking sides on the BLM issue or cops, what I am taking a side on is the Kaepernick is doing the very thing that other "patriots" have done and celebrated for.  For that he gets called a "piece of shit" by pro-cop supporters and "patriots"?

No, Colin Kaepernick is very much a patriot (despite not standing for the national anthem) and if you are too deaf to hear what he is really saying because you are too busy calling him names, then you are the very reason he has to keep sitting.
Posted by Bob Baylor at 12:27 PM No comments:

That headlines is from Newsweek, not some blog or fringe website.  Yet despite that, many Americans don't get that nuclear war maybe more likely that it ever was during the Cold War.  The Olympics, summer concerts, the riots in Milwaukee, or the latest celebrity scandal…take your pic.

The curious thing about the situation at Incirlik is the number of times I saw the term "B61 warhead" appearing in headlines.  I hadn't really heard or thought about this weapon since before I retired from the USAF nearly 10 years ago.  So why was this weapon suddenly appearing so much in the headlines?  I'm still working through that answer but in doing my research, I came across this headline...

US moves closer to production of 'smart' precision-guided nuke

Now the B61 should take on an even more significant spot in our national psyche as we continue to hold our noses over who we will vote for in the next election.  I've hear many critics point out that Trump's narcism makes him unstable and unpredictable, someone who should NOT have the ability to launch nuclear weapons.  Yet if you really get into the article, a precision guided nuclear weapon would be as equally tempting, if not more so, for Hillary.  She could easily justify the "greater good" of taking out a perceived threat with a surgical nuclei strike.

To complicate matters further, now Russia has not only based bombers in Iran but is using those to attack targets in Syria.

Syrian Conflict:  Russian bombers use Iran base for air strikes

While that means Syria is no longer enjoying a warm relationship with Russia, it also means that Hillary favorite for, Iran, now has mother Russia protecting its nuclear program.  Ah, and you thought those "smart" precision guide nukes were just for show!

Remember that the US military has been at war going on 15 years.  Troops are tired, equipment is worn out and needs to be replaced yet there is no money to do it so if the US were to get into some type of conflict with a nuclear power, smart precision guided nuclear weapons may become much palatable to use.

On and by the way, don't expect to be told the truth.  During the first Gulf War, a fuel-air-explosive was dropped on Iraq.  The explosion was so powerful the Russians swore the US had dropped a tactical nuclear weapon.  We hadn't but imagine in today's world…Hillary or Trump could easily claim that the explosion was due to some new conventional weapon and not a nuclear one.  And the media would play along.

So as Black Lives Matter scares black people of cops, and white people of black people, just remember…a nuclear war may just put all of those issues to rest.
Posted by Bob Baylor at 2:59 PM No comments: