Last year, the outbreak of the revolution now known as the "Arab Spring" was much celebrated by the West for it eliminate leaders such a Qadaffi. Even Hosni Mubarak, who took over as Egypt's president after the assassination of Anwar Sadat, was left to the rebels as his human rights abuses had become more than the West could ignore. However, you never know what you may get once the known is thrown out for the unknown"

The Camp David Accords were the result of 18 months of intense diplomatic efforts by Egypt, Israel, and the United States that began after Jimmy Carter became President. Efforts initially focused on a comprehensive resolution of disputes between Israel and the Arab countries, gradually evolved into a search for a bilateral agreement between Israel and Egypt.

In the meantime, Syria has declined Russian mediation in transferring power. Russian warships continue to be on-station off the shores of Syria making any military action by the West unlikely.
Posted by Bob Baylor at 7:17 AM 1 comment: 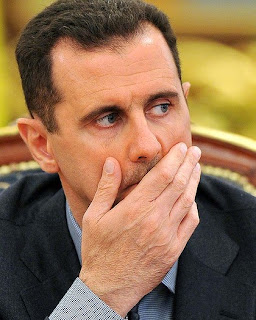 The "Arab Spring" began one year ago and unlike Northern Africa, its fire still burn unabated in Syria. Whereas the United States and European Union provided aircraft to help oust Qaddafi (and provided training and weapons to Egyptian rebels), both parties have remained out of Syria. Thus Bashar al-Assad has remained in power despite some of the most bloody confrontations with his own people. Thousands of Syrians have been killed by Assad forces. Bringing up the question, if the thug tactics of Qaddafi assured drones and bombers would be visiting his friendly skies, then why not Syria?

First, the Arab Spring started in Tunisia and spread east meaning revolutions started in Libya and Egypt before Syria. US and NATO forces, already thinly spread because of Iraq and Afghanistan, could only muster air strikes against Libya and covert support for Egypt. Placing ground forces in Libya would have guaranteed President Obama to be a one-term president. Sarkosy and Brown faced similar fates so they too resisted the use of ground forces.

Second, the United States also could not become so encumbered with Libya that it would be unable to strike at Iran. The Iranian nuclear program continues and should the US be in a position to strike, it will need much more firepower than it used in Libya. The US is quietly improving its Massive Ordnance Penetrator (MOP) as tests indicate it sill may not be able to strike the deep underground facilities of Iran.

Third, the Russians took a stand against Western intervention in Syria. The Russians have never been fans of US and EU tactics against Iran but have always expressed their dissent through diplomatic means. In the case of Syria, the Russians sailed navy warships to the coast of Syria as an unequivocal answer to any western strikes.

The U.N. Security Council has come up with a draft Arab-European resolution on Syria. The draft resolution condemns "the continued widespread and gross violations of human rights and fundamental freedoms by the Syrian authorities," demands that the Syrian government immediately put an end to all human rights violations, and calls on both sides to end attacks and violence immediately.

The resolution then lays out a political roadmap that matches the Arab League initiative intended to pave the way for a transition "leading to a democratic, plural political system" through the formation of a national unity government, the handing over of all presidential authority to Assad's deputy for a transition period, and then the holding of free and fair elections with international supervision. Foreign Policy

The Russians and Chinese will most likely veto any such resolution. Russia and China vetoed European resolution on Syria last fall and Russian Deputy Foreign Minister Gennady Gatilov said Friday that Russia would veto any resolution that seeks to remove Assad from power.
Posted by Bob Baylor at 7:43 AM No comments: 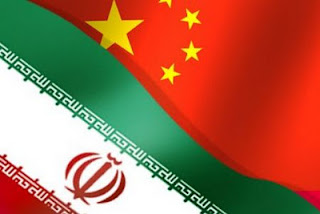 In physics, you learn nature abhors a vacuum. The United States and EU plan to levy economic sanctions against Iran means others could seize the opportunity to establish trade relations. Below is a link to an article on Crethi Plethi discussing the Chinese approach to a Iran's nuclear program. Instead of isolating Iran, China's approach is sort of trade for good behavior. That and the fact China's expanding economy needs oil and having Iran as an ally is important to their continued economic expansion. Sure, China's approach is self-serving but it has less chance of inciting a war compared to the West's. The recent take down of Somali pirates has to have been in part a message to Iran that President Obama won't back down. The gamesmanship is disconcerting. A nuclear armed Iran is being portrayed as equivalent of Armageddon. North Korea has had nuclear weapons for decades but the Korean peninsula remains intact. Pakistan, an alleged ally, has nuclear weapons primarily as a counter to India's nuclear weapons. The history between these two nations could have resulted in nuclear war but even with the Taliban, both sides have remained calm (at least from a nuclear standpoint). Given these examples, there is little evidence Iran would launch a first strike even with Ahmadinejad at the helm.

Crethi Plethi
Posted by Bob Baylor at 7:36 AM No comments:

Apparently, whatever caused Iran to back down from the tough rhetoric with the US seems to be back full swing. Imagine how this must appear to the Arab world. A Middle Eastern oil producer (who has previously exploited by Britain for their oil) is protesting an European Union oil embargo. The result is European warships sailing to the region, looking all the world like a prelude to taking over the Iranian oil production. To those that might scoff, please note what is happening in Libya (which produces 2% of the world's oil). France is at the front seat of redistributing oil rights in Libya (assuming the Muslim Brotherhood doesn't take over the country).

The Independent
Posted by Bob Baylor at 7:28 AM No comments:

USS Abraham Lincoln sailed through the Straits of Hormuz without incident. Iran had back down on the tough rhetoric that had been the standard for weeks. Some think it may have been President Obama who was able to get through to Iran that he wasn't kidding. More likely, it was other OPEC members in the region that weren't interested in having their oil exports jeopardized by shutting down the straits. You also can't dismiss the fact the an Iranian nuclear scientist died or was assassinated. If Iran truly believes the US was behind this, Ahmadinejad may not have wanted to push his luck. Things are not likely to improve though with the EU pushing for economic sanctions against Iran.

First Iran accuses the US of assassinating one of their nuclear scientists. Then another Iranian is assassinated who was working in the US. Now two US Marines are killed for illegally crossing the Iranian border. All of these events occurred after the US steamed a aircraft carrier through the Straits of Hormuz despite Iranian warnings that it would not tolerate the vessel crossing back. The rhetoric has never been more heated between the two countries. Ahmadinejad has even garnered the support of America's other favorite despot, Hugo Chavez. The relationship betweens these two cannot be under-estimated. Iran now controls OPEC and Venezuela is one of its members. Venezuela and Ecuador are the only members in the Western Hemisphere.

The most recent threat from Iran is that it will torpedo US war ships crossing the Straits. This year is a particularly tricky one for the Obama Administration. It can't seem weak on national defense with the Republican nominations in full swing. On the other hand, it can't risk getting into a full blown war with Iran one the eve of the Presidential elections. The unknown factor in all of this is Israel. They are closer and sense a far greater threat from a nuclear Iran than does the US. This may lead to a unilateral strike against Iran by Israel. Then the question becomes, what is the US prepared to do? Budget reductions are dropping troop levels and canceling weapon programs The F-22 fleet is grounded more often than not. The public is tired of the war on terror and wants our troops home. And let's not forget Kim Jong eun who is another unknown on the global stage. The US is facing one the scariest times since the Cuban missile crisis.

US News and World Report
Posted by Bob Baylor at 7:37 AM No comments: