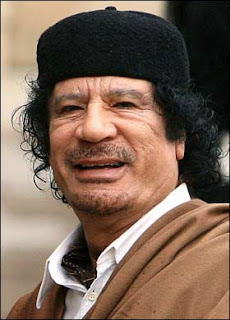 Gaddafi has vowed to die rather than step down. He has gone out and hired mercenaries to put down the protestors. While the protestors have taken over Benghazi, Gaddafi still controls Tripoli as well as the military. If the military should stop following Gaddafi’s orders, he can still use the mercenaries to control Tripoli. Civil war is the likely outcome or Gaddafi’s assassination.

This seems a far cry from the bloodless coup d’état Gaddafi lead taking over power from King Idris. He added the title of prime minister in 1970, but gave up this title in 1972. Unlike some other military revolutionaries, Gaddafi did not promote himself to the rank of general upon seizing power, but rather accepted a ceremonial promotion from captain to colonel and has remained at this rank since then. While at odds with Western military ranking for a colonel to rule a country and serve as Commander-in-Chief of its military, in Gaddafi's own words Libya's society is "ruled by the people", so he needs no more grandiose title or supreme military rank.

Gaddafi followed a form of Arab nationalism he called “Islamic Socialism”. Basically there was still private ownership over smaller companies but the state controlled larger corporations. In 1977, Gaddafi proclaimed that Libya was changing its form of government from a republic to a "jamahiriya" – a neologism that means "mass-state" or "government by the masses". He has used death squads in the past to assassinate dissidents.

Secretary Clinton stated this is completely unacceptable with about as much passion as if she said the walls need to be repainted. I suspected the situation in North Africa and Middle East has worn her out. There is also the very real possibility that the Saud family, who rule Saudi Arabia, will be facing the same challenges in the not too distant future. If so, $4.00 a gallon for gas will seem like a steal.
Posted by Bob Baylor at 7:18 PM