Protests, a study in contrasts 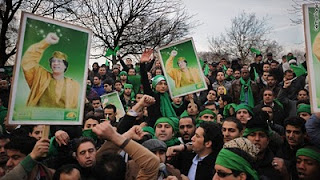 "Libyan protesters celebrated in the streets of Benghazi on Monday, claiming control of the country's second largest city after bloody fighting, and anti-government unrest spread to the capital with clashes in Tripoli's main square for the first time. Moammar Gadhafi's son vowed that his father and security forces would fight "until the last bullet."


The pan-Islamism protests cover the gamut from the oppression of Mubarak to the progressive monarch of Morocco. The constant is the protests are continuing to spread.

Contrasted with the protests against efforts to end collective bargaining for state employees:

"After six days of protests that packed the state capitol, Wisconsin's major teachers' union called on members to start returning to work Monday but keep fighting a proposed rollback of union protections for public employees."

The passion for change between the two regions is remarkably different. Some may argue that the protests in the Middle East are about disposing oppression which fuels a higher level of passion. Perhaps, but isn't defeating efforts of government to end collective bargaining similar in principle? To those that say "no" let's look at France back in November:

"AIR passengers in France are facing up to five days of disruption later this week, as two separate strikes affect flights.

Four trade unions have called on airline and airport workers to walk out on Thursday, November 4, to keep up the protest against pension reforms.

The strike will be immediately followed by a four-day walkout from November 5-8 by French airline pilots, cabin crew and airport staff."


I point out the contrasts between the two protests for I suspect things have a potential for turning ugly here in the US. There is much resentment on both sides of the political spectrum. The attempt to end collective bargaining is seen by many as an attempt at union-busting. Such attempts in the past have resulted in violence. The US seems to have more pacifistic in regards to violent strikes but with a stalled economy, no jobs, decreasing home ownership and no immediate prospect for recovery, the potential is there for the US to follow the pan-Islamist model of rage.