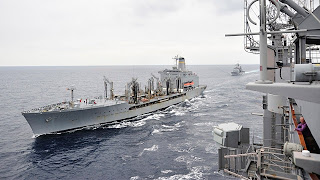 A Navy official said it's not uncommon for Iranian speed craft to harass U.S. ships in the region, but in this case the boat wasn't Iranian.

"I can't emphasize enough that this has nothing to do with Iran," the official said.

Really? If we weren't trying to pick a fight with Iran, would our Navy ships be in a position to have to defend themselves? Ah but you say this was a set-up, the US Navy is trying to instigate. Well read on.

Raelson said the small motor vessel that was hit by gunfire from the Rappahannock was "approaching at a high rate of speed" and "on a deliberate approach."

Why would anyone come full speed at a military ship? The smaller ship had on board four Indians and one Emirat. Interesting how the United Arab Emirates has already come out and said it does not appear to be an act of terrorism. Even our drunkest American boaters don't roll up on a US Navy ship at high speed on an intercept course. You know you will receive the same fate as the boaters in the Gulf war. The incident just keeps reminding me of a term from the Reagan era, plausible deniability. There were no Iranians or Syrians on the craft but why would 4 Indians and one Emirat find it necessary to harass a US Naval warship? Me thinks someone wants to pick a fight and it isn't just the US.

ABC News
Posted by Bob Baylor at 7:33 AM No comments: 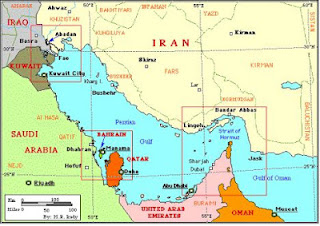 The L.A. Times is reporting, "The U.S. already has sent two aircraft carriers and a squadron of F-22 fighters to the Persian Gulf, and is keeping two U.S. army brigades in Kuwait. Though much of the buildup has been publicly acknowledged by the Pentagon, the deployment of the submersibles has not been publicly disclosed, apparently to avoid alerting Iran."

The Iranian missiles can just as easily be used against surface ships as land based targets. While some of the US Navy have anti-missile systems, not all do. As the map points out, the Straights of Hormuz are very narrow. Any conflicts will surely result in high causalities on both sides.

The US is putting most of naval might into the region, meanwhile Putin is putting his 11 warships in the Mediterranean. It seems inevitable that with so many combatants in the area it is only a matter of time before someone starts shooting.

L.A.Times
Posted by Bob Baylor at 7:30 AM No comments: 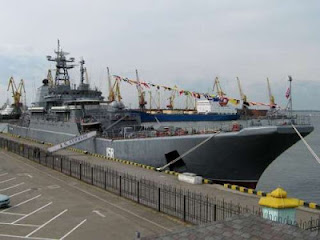 The Tsezar Kunikov pictured above is one of 11 Russian naval vessels that will partake in exercises off the cost of Syria. The Tsezar Kunikov and Nikolai Filchenkov are fleet landing craft that carry Marines. President Putin seems to have sent this flotilla as a counter to the increasing likelihood of military action by the West. The fleet will keep the Obama Administration on its toes since they will to look at Bear bombers encroaching on the West and the Russian Navy in the Middle East. A smaller contingent of Russian ships had successfully kept the West from launching airstrikes into Syria. The larger flotilla seems to also be in a position to deploy troops rapidly if that option becomes necessary. President Obama and Secretary Clinton may have to wait a bit longer before they can pick a fight with Mr. Assad or Mr. Ahmadinejad. On the other hand, Mr. Putin seems ready to pick one with them. Russia Sending Warships on Maneuvers Near Syria
Posted by Bob Baylor at 7:49 AM No comments:

Russia's Putin says the West is on the decline

Quick, what happened to all of the hardline Soviet Communists when the Soviet Union fell? Well they certainly did not all give up their ideology and some even have become president....
President Vladimir Putin said on Monday the West's influence was waning as its economy declines but warned Russian diplomats to be on their guard against a backlash from Moscow's former Cold War enemies.
Reuters
Posted by Bob Baylor at 7:56 AM No comments:

Looking at the vodka and tea (Russia and China)

The crisis in Syria is now spilling into Lebanon while the US and EU seem powerless to stop short of military action.  Military forces in Syria means increased risk of war with Iran (which has already taken he ugly step of testing its missiles).

The US and NATO (which is more or less the armed forces of the EU) have demonstrated an ability and desire to launch airstrikes in Libya.  As I've pointed out before, the check for US and NATO is the alliance between Russia and China.  The former has positioned naval vessels off the coast of Syria.  The latter continues to check every diplomatic or economic maneuver the US or EU tries.

Russia has for the second time in as many weeks entered the US air defense identification zone (ADIZ), this time in the Pacific.  Whereas the first would seem to target Fort Greely in Alaska, the latest seems to target Vandenberg AFB in California.  The Obama Administration's response, in keeping with its reset policy, is to announce another cut of 1,000 to 1,500 nuclear warheads.  Reducing the number of weapons in the face of increasing aggression makes no sense.  Russia does not follow any kind of Marquess of Queensbury Rules.  Getting rid of your weapons in the face of Bear Bombers indicates you don't have the stomach for a fight.

It also makes the US position weak in the Middle East.  While both the Bush and Obama Administration have shown a willingness to go to war in the region, none of their previous targets had such a strong backing from Russia and China.

Secretary Clinton is trying to get Assad's opponents to make Russia and China "pay the price" for helping the Syrian leader maintain power.  The absurdity of this statement caused the Chinese Foreign Minister Liu Weimin to snap "Any words and deeds that slander China and sow discord between China and other countries will be in vain".  Touché.

Meanwhile, China has been busy in this hemisphere while the Obama Administration has been focused on the Middle East.  Argentina's defense minister spent six days in China signing military agreements and praising their military technology.  Defense Minister Puricelli calls China an economic, political, and military partner that shares a strategic position in international security that is entirely consistent.  Beijing was quoted as saying China wants to do more with Argentina.

The US has not forged any new military alliances as it heads into an uncertain future in the Middle East.  The Obama Administration may be tempted to seize re-election gold by launching an attack against Syria (likely) or Iran (frightening).  The repercussions will well outlive the elections and may be the start of a Third World War.
Posted by Bob Baylor at 10:06 AM No comments:

Israel "must be wiped off the page of time"

So said Iranian President Mahmoud Ahmadinejad in 2005.  On Sunday, Iran took another step towards picking a fight with Israel when it announced missile tests.  The tests are a response to the European Union's banning imports of Iranian oil by its members (as though the EU doesn't have enough on its mind these days).


All of this gamesmanship is about preventing Iran from developing a bomb.  The west is convinced that Iran's nuclear power program is merely a cover for developing long range nuclear weapons.  Iran sees the US, Britain, France and most likely Israel as having nuclear weapons yet preventing the Persians from entering the stage.


Israel is believed to have nuclear weapons yet it is not not recognized as a Nuclear Weapons State by the Nuclear Non-Proliferation Treaty (NPT) making it easy for the West to ignore the hypocrisy of claiming Iran is the sole destabilizing force in this situation.  (Note; the NPT also does not recognize North Korea, Pakistan or India as nuclear states yet there is little denying the three possess nuclear weapons).  It puts into a whole different perspective threats by Israel that it will not tolerate Iran's possession of nuclear weapons.


According to Yeganeh Torbati reporting for Reuters, Washington sees the sanctions and talks as a potential way out of the standoff to avert the need for military action, but has not said it would block Israel from attacking Iran.  The US has deployed F-22 fighters to the United Arab Emirates and maintains a huge presence in both Bahrain (the US 5th Fleet) and Qatar (Al Udeid AB).


The US is concerns about a nuclear Iran is centered more on oil and the Tehran embassy crisis than in reality.  Pakistan and India are two of the most theologically and politically opposed nations in the world now and both possess nuclear weapons.  Thus far, they have avoided any serious confrontation although there has been many incidents of missile testing.  Iran is attempting to enter the nuclear world stage which requires the appropriate level of fanfare.  Yet Israel very likely has possessed nuclear weapons since the mid-1970s without the corresponding nuclear crisis one might expect.


Iran is serving as the latest boogeyman, a role formerly held by the Soviet Union.  However, unlike the Soviets the Iranians don't have the requisite numbers to be of a real threat to the US.  The real concern for the US is a nuclear capable Iran could spell trouble for the regions oil supplies.  Saudi Arabia especially is concerned about facing their ancient foes again armed this time with long range nuclear weapons.


The Syrian crisis is serving only to make matters worse.  Attacking a NATO nation has already resulted in the EU sticking its nose in something that will only make Iran more desperate.  The US tried sanctions against Iran a long time in response to the Tehran Embassy crisis with little result. These sanctions will only make Iran's relations with China and Russia stronger.


The West seems determined to have a conflict in the Middle East, especially with Iran.  If that does happen, I don't see how it does not make Russia and China stronger while the US and Europe use up their military might.